Audierne, a harbour and a town

Audierne is a delightful Breton harbour town with bustling quaysides and tiny, narrow streets steeped in history. During its heyday in the 19th century, Audierne was an important fishing port and naval recruiting centre.
The development of maritime navigation between the 15th and 17th centuries brought wealth and prosperity to Audierne. Dried fish and cereal were exported in exchange for wine, wood and iron. The port was the only one between the Pointe du Raz and the Pointe de Penmarc’h and at the beginning of the 17th century it had as many as 200 vessels and 165 trades. In 1840, Audierne was still a major commercial port with an average of 200 merchant ships per year, so the ‘Môle du Raoulic’ breakwater was constructed between 1847 and 1852 to regulate the increasing volume of traffic through the channel.

In 1894 a train started running between Douarnenez and Audierne, visitors were taken to the Pointe du Raz by horse and cart and tourism began to develop. Trescadec beach features in works by many artists from Renoir to Buffet. This new golden age of commerce was accompanied by an important, ambitious plan for lighthouses and buoys to guide shipping through the Mer d’Iroise to the port of Audierne.

The Cap Sizun area is particularly well-served by these installations. The second half of the 20th century saw the rapid expansion of a new form of fishing where line fishermen, netters and long-liners found themselves working alongside pleasure boats.

The little harbour of Pors Poulhan marks the southern gateway to Cap Sizun on the Route du Vent Solaire (tourist route). This charming spot is a perfect place to stop and enjoy the wonderful sea air.  The statue of a Bigouden woman by the famous Plouhinec sculptor René Quillivic marks the boundary between the Pays Bigouden and Cap Sizun, while the lighthouse at the harbour entrance sends beams of light through the dark night.

Fishing is an essential element of the local economy. Watch fishermen landing their catch during the afternoon or take a guided tour of the fishmarket to learn about the different species, quality, and special labels of fish on sale and to watch the auction itself.         Although the fishmarket is the smallest in France in terms of tonnage, it is highly reputed for the quality of its products. Prime fish such as line-caught sea bass, red bream and pollack rub shoulders with Breton lobster.

Poulgoazec was also a bustling place in days gone by. Boats came to land their catches and it was the site of several fish and vegetable canning factories. Land was reclaimed from the sea to build quays and then the fishmarket. Stroll past the stone-built fishermen’s cottages and Fishermen’s Rest to imagine what life used to be like in the past. Today, as well as a fishmarket, Poulgoazec is also a water sports centre and the venue for concerts and festivals – the essence of Brittany in a nutshell. 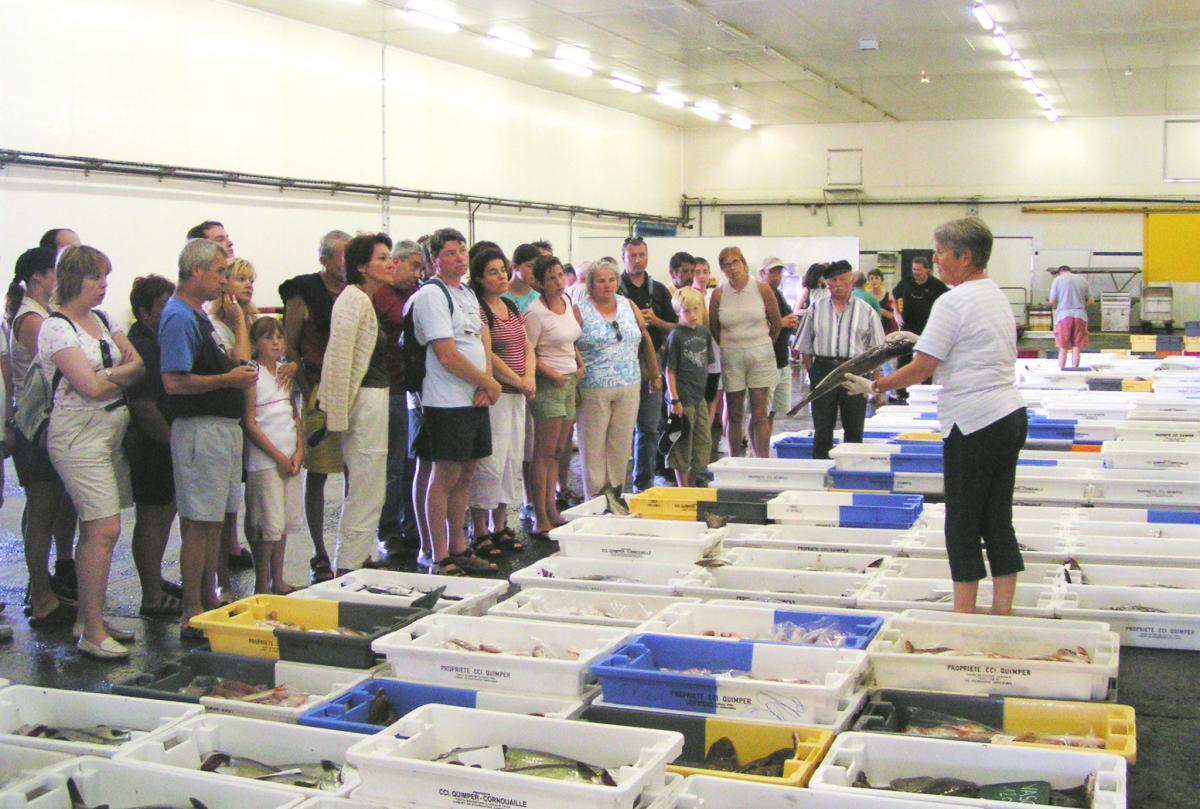 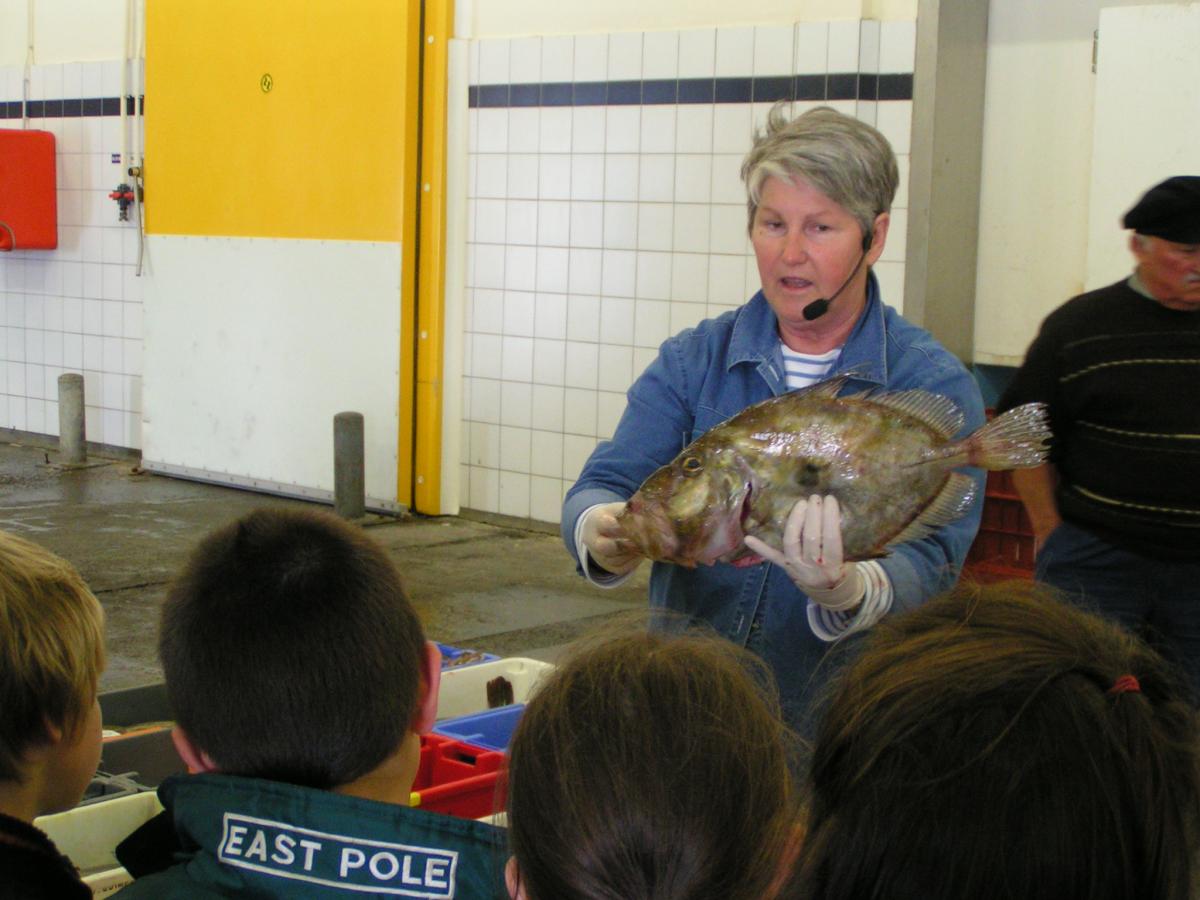 La Vieille (literally ‘the old lady’!) lighthouse stands proudly opposite the Pointe du Raz, in the treacherous Raz de Sein, much feared by seamen. It is easily recognisable by its square tower which rises 35 metres above sea level. North-west of La Vieille, Tévennec was one of the first lighthouses in the Mer d’Iroise to be automated as its ill-fated reputation made lighthouse keepers reluctant to go there. The mythical Armen lighthouse emerges from the turbulent seas off the Ile de Sein. It is built on a rock and its construction was long and arduous. At Beuzec Cap Sizun, the ‘Maison-Phare du Millier ‘ is an integral lighthouse which was built during the golden age of sardine fishing at Douarnenez, when more than 600 boats crossed the bay daily. The lighthouse on the Ile de Sein was destroyed during the Second World War but was rebuilt afterwards. It was the last remaining manned lighthouse in Finistère and was automated at the beginning of 2016.

Let’s not forget beacons like ‘Le Chat’ on the south-east tip of the Ile de Sein and ‘La Plate’ to the south of La Vieille, lighthouse, which continue to play an important role. Eleven marker buoys and a lighthouse have been installed along the new road leading to Poulgoazec harbour in Plouhinec so that visitors can see the rich coastal heritage in this domain. A series of information boards explains how each of these metal objects was used to guide shipping in its previous life.